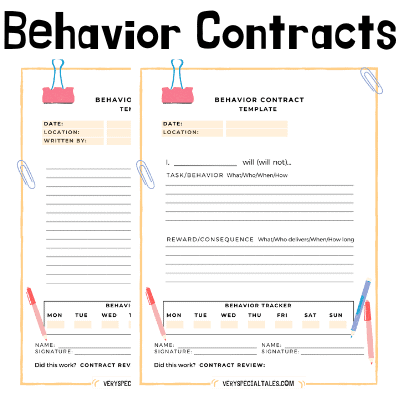 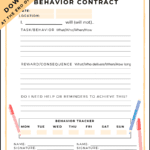 Teen Behavior Contract: In this post, we will review the best practices to prepare an effective behavior contract for your teen or tween.  We will also share some examples to help you with your own parent-child contracts. At the end of this article, you will be able to download a few behavior contract templates (PDF) and a helpful checklist.

Behavior contracts for teenagers are a simple yet effective intervention to help modify behavior(s).

What is a Behavior Contract?

A behavior contract is a written agreement between two parties that captures:

A behavior contract is also known as a behavioral contract or a contingency contract. The American Psychology Association defines it as follows:

A mutually agreed-upon statement between a teacher and student, a parent and child, or a client and therapist regarding the change or changes desired, typically specifying behaviors and their positive and negative consequences.

Behavior contracts clearly outline the rules, expectations, and overall agreements that your child will adhere to in the school or home setting.

A contingency contract essentially helps improve challenging behaviors through a reward system, allowing children to understand the consequences of their actions, make good choices, and be more accountable.

A behavior contract is a great parenting tool and a helpful resource to address student’s behaviors in the classroom.

Related articles: 14 Tips on How to Help your Teen with Anger Issues

Why are Teen Behavior Contracts Effective?

Behavior contracts are effective for a number of reasons: 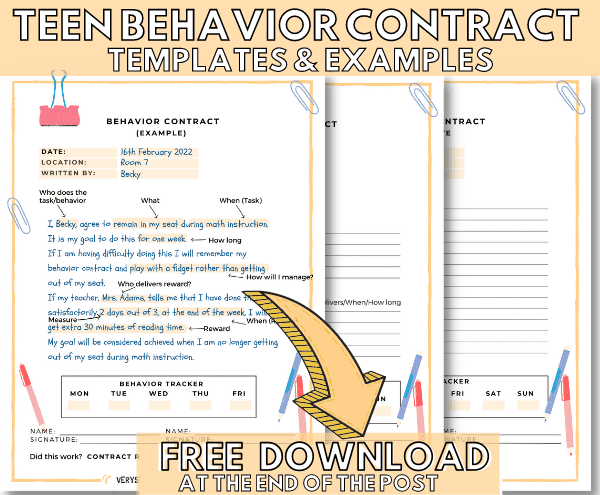 Components of a Behavior Contract

Behavior contracts are generally formally written down and will have 3 main components:

Defining the Task in a Behavior Contract and Practical Examples

The first component is desired behavior or task(s).

Within this component, we must address the common Ws questions (who, what, when, and how):

Let’s take, for example, a relatively small challenging behavior such as slamming doors.

If you are aiming to have this behavior diminish, these would be the questions to address in your behavior contract.

Other important aspects to consider when you are choosing the behavior you will include in your parent-child contract:

A behavior like “behaving better” is not specific or measurable.

Identifying the Consequence or Reward in a Teen Behavior Contract

The next component is perhaps the most important because it identifies what the consequence of success or failure will be.

It is important that you involve your teen in this part of the process, as the reward will be a strong motivator to change the given behavior.

We need to be clear and specific on the reward components too:

Ask your teen to write down on a piece of paper what potential rewards they would like to earn if they complete the task or desired behavior. You can also have a brainstorming discussion.

You’re not going to give your teen a brand new car for not slamming the doors.  Instead, it should be something simple. Maybe a pizza party, allowing for a sleepover at their best friend’s house, extending their curfew for a special concert. Whatever your child is motivated by, and whatever you are able to provide as the parent.

The final component that can not be ignored, is the measurement of when the behavior has been achieved.

In some cases, it will be interesting to understand how often the behavior is currently occurring. This baseline will allow us to set realistic and achievable objectives.

Let’s go back to the same door-slamming example. Is your teenager is engaging in this behavior 10 times a day, every hour, or maybe even after every meal?  It would benefit you and your teenager to make the goal attainable by stating that they don’t slam the door for one day, for one meal, or for a certain amount of time respectively. This way the goal is attainable and does not become too much of an overwhelming task.

How to Prepare a Behavior Contract for your Teenager

Preparing a behavior contract is quite similar to setting goals for kids.

Most commonly, behavior contracts for teenagers are formally written, and clearly outline the behavior that needs to change, how, and when/what is the time frame.

These are some tips that will help you craft effective family contract:

Talking to your teen and getting their feedback is the most important part since they are the focus of our attention.

The best way to have this talk with your teen is from a point of understanding.

Example: “Becky, we’ve noticed that you are increasingly slamming your door when you get upset. We want to work on this behavior with you by creating a behavior contract that will help and remind you what we expect from you. If you are able to stop this behavior, we think that you deserve a reward. Can you brainstorm some ideas with us on what you may want as a reward once you achieve your goal?”

This very simple script highlights the collaboration between the child and the parents. It allows them to express their concerns, while also allowing parents to come from a place of understanding and compassion.

To put this more concretely, we can write a short behavior contract for the example of slamming doors.

In this example, we will cover all the terms of the contract that we mentioned in our previous section.

“I, Becky, agree to make a positive change towards my goal of not slamming doors. I will achieve this goal by remembering my behavior contract when I feel the urge to do so, and instead going to my break corner or asking for a break. If I am successful at not slamming my door for 3 days straight, my reward will be a night out with my friends. This goal will be considered complete when I no longer slam my door to express my discontent, but rather use my words and other coping strategies. I will know that this goal has been successfully achieved for the 3 days when my mom and dad tell me so”.

Behavior Contracts for Kids at School

Behavior contracts are a helpful tool for the school setting too.

The mechanics are the same, but may differ in:

In school, a teacher might have a need to address behaviors such as speaking out of turn (without raising their hand), getting out of their seat, talking to classmates during instruction, or maybe even being disruptive to peers during certain times.

This is an example of that a behavior contract for a student could look like:

I, Becky, agree to remain in my seat during math instruction. It is my goal to do this for one week. If I am having difficulty doing this I will remember my behavior contract and play with a fidget rather than getting out of my seat. If my teacher, Mrs. Adams, tells me that I have done this satisfactorily, at the end of the week, I will get an extra 30 minutes of reading time. My goal will be considered achieved when I am no longer getting out of my seat during math instruction.

As we’ve gone through the steps of creating a behavior contract for teenagers, we’ve learned that these contracts are simply contingency agreements to achieve a positive change in behavior.

Whether you refer to a behavior contract as a plan, an agreement, or a contract, the fact remains that they are effective.

Behavior contracts allow teenagers to reflect on their behaviors, take accountability for those behaviors, while also being motivated to make a positive change.

Teachers and parents alike are able to use these behavior contracts to address behavior change.

The first step towards achieving that goal is to work collaboratively with your teen and come from a place of kindness and understanding.

I’ve prepared a few printable behavior contracts (templates). Some guide you through most or all of the contract components, while the last one is a nice blank template. 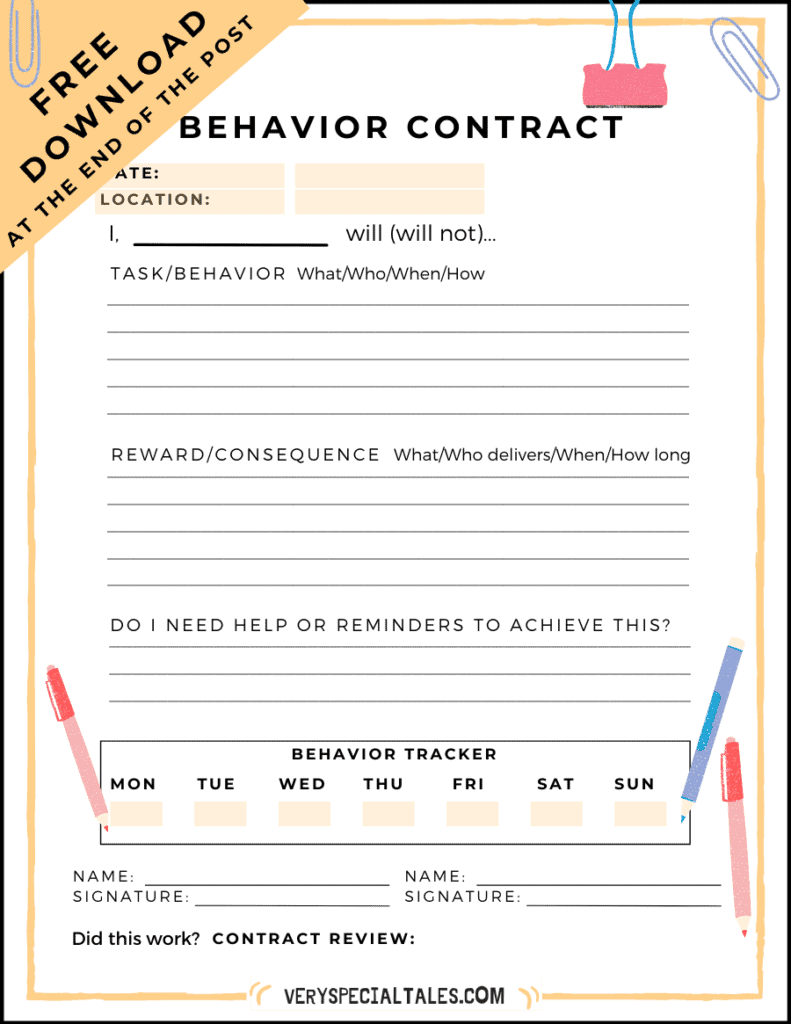 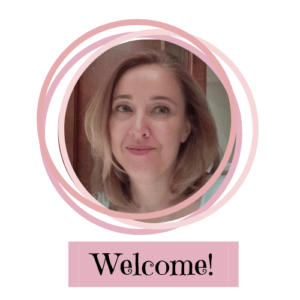 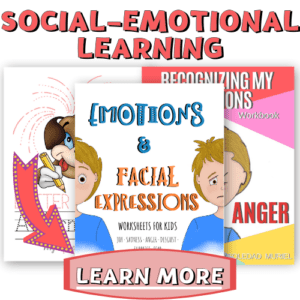 We are a participant in the Amazon Services LLC Associates Program, an affiliate advertising program designed to provide a means for us to earn fees by linking to Amazon.com and affiliated sites

We use cookies to ensure that we give you the best experience on our website. If you continue to use this site we will assume that you are happy with it.OkRead more